A tale of diplomatic disaster based on true experience…

”If you like the greats of British Political satire television you will love this book..” Stu Allen

Mission London by Alek Popov was first published by Zvezdan Press, Sofia, in 2001. Since then the novel has seven editions only in Bulgarian. The last three were released by Ciela Publishers. Ciela also released the play after the book together with a CD with its radio-version.

Orient Express, a British literary magazine with strong interest in Eastern European literature, first published a considerable excerpt of the book in 2004. The English translation of Mission London won as well the annual 2004 prize of Clouds magazine, a multicultural literary site based in US where parts of the novel used to be published in series during 2003-2004.

Iin 2006 the book was published in Macedonian by Provestno Delo and in German by the Austrian publisher Rezidenz Verlag. A paperback edition in German followed in 2008 by DTV.

In 2008 Mission London appeared also in Turkish under the title Kiralik Kralice (Hired Queen). It was published next in Italian by Voland Editioni and in Polish by Muza Publishing House. In 2010 the book appeared in Czech from dybbuk, in Greek from Kedros, in Estonian by Olion and in Croatian by Meander Press. In 2011 it was published in Albanian by Ideart. In 2012 the book was published in Latvian by Janis Rose Publishers, Riga, 2012. In 2013 Mission London appeared in English by Istros Books and in Slovenian by Cankarjeva Zalojba.

The novel has made it into the Best literature in translation 2014 English PEN list.

BUDAPEST — With 46,291 admissions earned over its first weekend, “Mission London,” a Bulgarian-produced feature film directed by newcomer Dimitar Mitovski, has proved to one of the strongest Bulgarian domestic releases in a generation and the third highest grossing opener ever.

Sofia-based A Plus Films, which is distributing the pic in Bulgaria, told Variety that the response of moviegoers to “Mission” has been unprecedented with its April 16 opening weekend almost rivaling “Avatar’s” total of 48,124 tickets sold.

“The film is a breakthrough phenomenon,” said A Plus’s Christo Dermendjiev, “because Bulgarian films during the past 25 years have always been very poorly attended. The film was playing to sold out auditoriums during the opening weekend.”

For the film’s distrib, the film’s success is as unexpected as it is unprecedented.

But audiences appear to be responding to the feature’s strong entertainment values, often lacking in art-based local productions.

A comedy of errors, “Mission London,” starring Tomas Arana (“Gladiator”) and Bulgaria’s Julian Vergov, is the story of a Bulgarian First Lady who throws a London party with the obsessive hope of attracting the attendance of Queen Elizabeth II, but lures a look-alike instead.

“Mission London” arrives in Bulgaria just as the nation’s post-Communist exhibition infrastructure is rebuilding. Bulgaria boasts 111 screens nationally, with over half (62) in the capital of Sofia; 59 of Sofia’s screens are located in its five multiplexes with 10 additional plexes situation elsewhere in the territory.

“Mission London” was produced by Bulgaria’s SIA and is distributed internationally by U.K.’s Stealth Media. 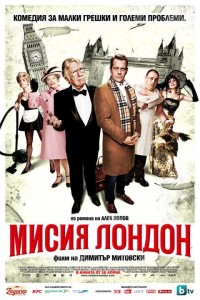 The Bulgarian National Radio produced a radio-version of Mission London broadcast in 2004. The play after the book won the National Prize for Drama “Ivan Radoev” in 2005. The stage version and the CD with the radio-play were released in 2008 by CIELA publishing house.

In September ‘09 the theatre of Osnabrueck, Germany, produced the stage version of Mission London, directed by Sebastian Hirn for the Festival Spieltiebe ‘09

The novel Mission London is the funniest book in the contemporary Bulgarian Literature. So funny that in the end the reader feel like crying… After several books of short stories bursting with black humor Alek Popov proved his talent as novelist.

This is a true European comic novel in the best tradition of P.G. Wodehouse, Roald Dahl and Tom Sharp. There is an excellent narrative, great awareness about the detail, fresh humor and most importantly – sense of moderation. The situations are typically Bulgarian, yet the irony brings the taste of Englishness.

On the book market appeared a novel that in my opinion is the long awaited revenge for all the humiliations, experienced by the Bulgarian citizens in their contacts with the Bulgarian authorities abroad. A grotesque and dazzling flight over habits, left from the past. I recommend you fervently that book – the sardonic laugh is the only defence we have at that moment.

Through the anecdote to the grotesque the story goes on according to the best European traditions… If you manage to discover the possibilities for overcoming the provincial mentality offered by this text you will be the discovered readers.

Alek Popov is one of the most well known contemporary Bulgarian writers. So much so, that he is now translated even in Serbian – in magazines, collections and anthologies of Bulgarian prose. For the non-complete forty years of his life and work so far, Popov has found time to engage with a number of other endeavours, such as to spend time as the Cultural Attaché of Bulgaria in London. This biographical fact is important because of its bibliographical significance: Alek Popov’s first novel (after several collections of short stories), “Mission London” would not be the same without the real life experiences of the author. This, of course, does not mean that the author has described “things as they are”, i.e. “real” people and events – he shrewdly avoids this by the standard, “all events and people are…”, you know what follows – more likely, the experience has helped him in the perceptive and very witty observation of the cultural and material (and from there the political and ethical…whatever) collision between the Island and the Sub-continent, not to repeat the worn – East and West or Europe and the Balkans.

Alek Popov demonstrates his unbelievable story-telling mastery, skill to create characters ( full-blooded, colourful individuals, and yet representing the “heroes of the day”), as well as the ability to observe without unnecessary wordiness, which probably comes from the experience of so many collections of short stories that he can sniff-out any potential “extras” from his novel, before even writing it…

What makes “Mission London” one of the most pleasant translations (at least) this season is the fact that Popov gives us all that the Serbian authors lack: the novel is a true lesson or an exhibition lesson in communicative writing, without this taking any away from the “aesthetic value” of the work; this is an example of a potential clever bestseller; breathtaking play with our well known “Self-Europesation” of the (South)Eastern men, but also the cold indifference of the West, and the pitiful naiveté of our “new reach”, who in their search for the dream of imperial glory let to be led by the nose. Popov is not too merciful neither to the “indigenous” nor to the suspicious Balkan newcomers; his wit is not less forgiving when it comes to the overall “Balkan people,” for example their bickering in entering the EU or maniacal obsession with their image as the “oldest people,” centred in the idea that it is us that is the centre of Europe (and not for example the bottom), only that those … don’t want to admit it. As a unbelievably funny book “Mission London” is not only an excellent choice for the hot summer days in Belgrade, but also for the beaches in Albena, Neseber, and Sunny Beach, easting banica or halva. If nothing else this book will help you understand, that there as well you are home. – Teofil Pancic, Vreme, Beograd

“Mission: London“ is not only a very entertaining read, it also gives insight into the balcanic sensitivities at the beginning of the 21st century. Alek Popov succeeds with his fulminant debut novel. With much wit he presents a grotesque story that, in its exaggeration, sharpens the view for the essential. – Ulrich M.Schmid, Neue Zuricher Zeitung

Alek Popov gives a magnificently unmasking satire of European East/West relations. With competence he toys with clichés and truths, lets them merge into one another. A multitude of interesting characters are gathered around ambassador Dimitrov. They are all shaped out very well, and they – from the East and from the West alike – succumb to the absurdities of everyday life. „Mission: London“ is worth a read for many reasons. Not last of all, besides all the comic, linguistic virtuoso descriptions like this: „The vodka was ice-cold and smooth like a snowflake on Christmas day“.
– 3sat, Christina Merklenbach

Alek Popov has made it into the Best literature in translation 2014 English PEN list! Per A.M. Bakalar’s pick our own Alek Popov’s MISSION LONDON is among the listed best reads in 2014: “…Books that make you laugh are notoriously difficult to write. Two novels, published this year, in particular brought me to tears. Mission London by a Bulgarian author Alek Popov translated by Charles de M Gill (Istros Book) and Look Who’s Back by Timur Vermes translated from German by Jamie Bullock (MacLehose Press). The former describes the experiences of a newly appointed Bulgarian ambassador to London, the latter brings Adolf Hitler from the dead into contemporary Germany. I can’t remember when I laughed so much during reading in years.”